No items found.
Product is not available in this quantity.
← Farming

Our livestock are all traditional or rare breeds.

The native Jersey cows, all hail from pedigree stock imported from the Island of Jersey. There, the breed was protected from outside influence for over 200 years, resulting in the breed retaining original characteristics such as a light frame and lower weight than it’s counterparts in countries such as America where intensification has led to larger, heavier animals with larger udders. The native Jersey is a small, short-horned dairy cow, known for the high content of butterfat in its milk. Although the Jersey is not renowned for its meat due to its small size and lack of muscular development, in flavour and texture the beef is superior to many. Here at Waltham, we operate a closed herd, only buying in stock from the island of Jersey occasionally to replenish bloodlines. We have a Jersey bull named Copper Beech, who runs with the herd. Calves are not separated from their mothers, so family relationships can be observed within the group. Female calves join the dairy herd, whilst male calves are raised for beef. From time-to-time male calves may be selected for training as working oxen if they are deemed to have the required personality traits. To us, the cattle are essential to the farm’s biodynamic ethos, both for their role in building soil fertility and for the foods they provide. Butter, produced in the dairy, goes straight to the chef for use in The Barn and our Jersey beef is used for the barbecue.

The Castlemilk Moorit sheep are descended from the original flock, bred by Sir Jock Buchanan-Jardine on his Scottish estate, during the early years of the twentieth century. By crossing moorit Shetland with Manx Loghtan and wild Mouflon, he developed a breed of delicate beauty to provide a fine, kemp free, pale brown moorit coloured wool. Upon the death of his successor, Sir John Buchanan-Jardine in 1970, the majority of the flock were culled though a few dispersed elsewhere, including six ewes and a ram which were bought by Joe Henson at the Cotswold Farm Park. All today’s Castlemilk Moorits, including those at Waltham Place, are descended from these few dispersed sheep. Smaller in size than commercial sheep breeds, mature ewes weigh approximately 40kgs, and mature rams around 55kgs. A horned breed, our ewes sport two symmetrical horns arching back behind the head. The rams have much thicker, heavier horns, spiralling backwards and round towards the front again. Though moorit brown in colour the fleece may reveal some sun bleaching. Faces are a darker shade of brown and most have definite mouflon pattern markings which may include: white around the eyes, lower jaw, belly, knees and inside the lower leg and tail together with a rump patch. Often mistaken for deer by visiting schoolchildren, the sheep and lambs blend seamlessly into the landscape. They are flighty and prone to scatter when herded. Yet they can be bucket trained, making handling them easier, particularly when moving from one field to another for fresh grazing. As with the cattle, females are retained to grow the flock whilst male lambs are raised for meat. Although small in size and slow growing, the meat is full of flavour and well worth the wait. 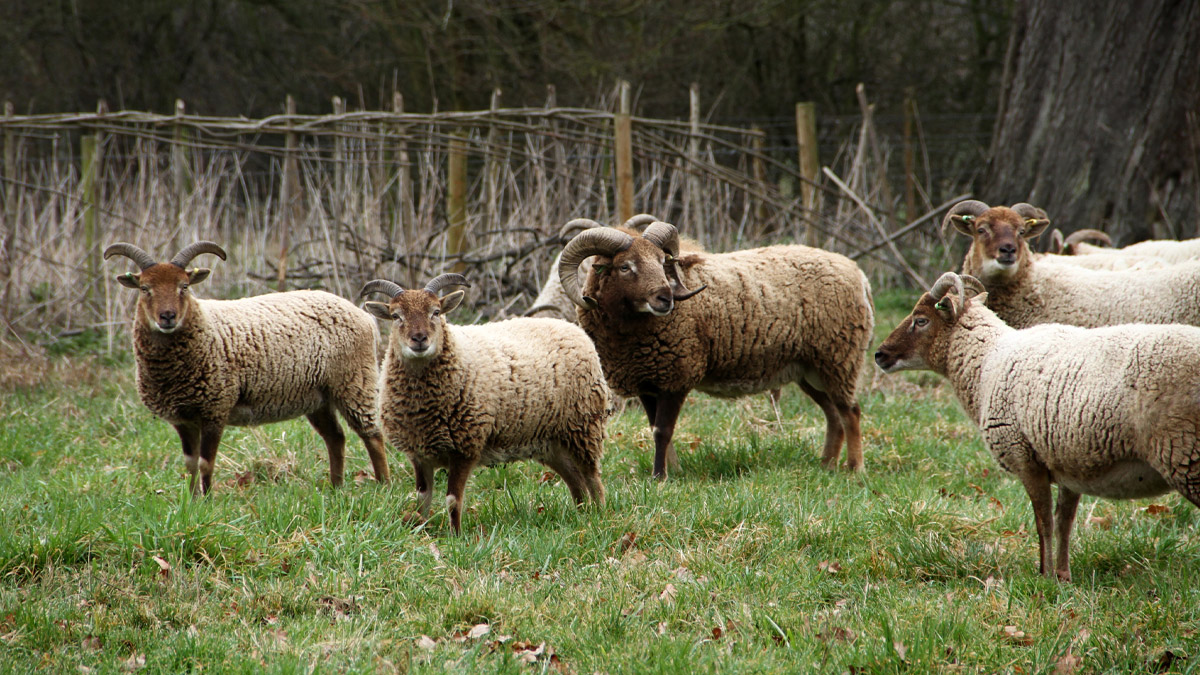 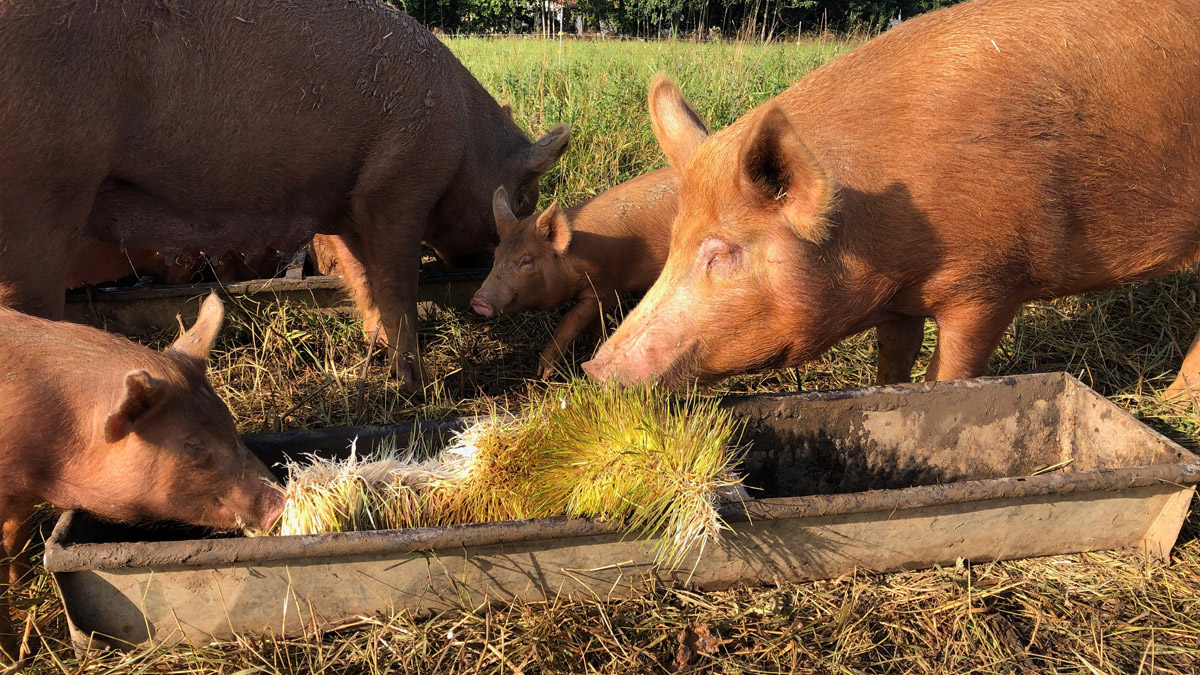 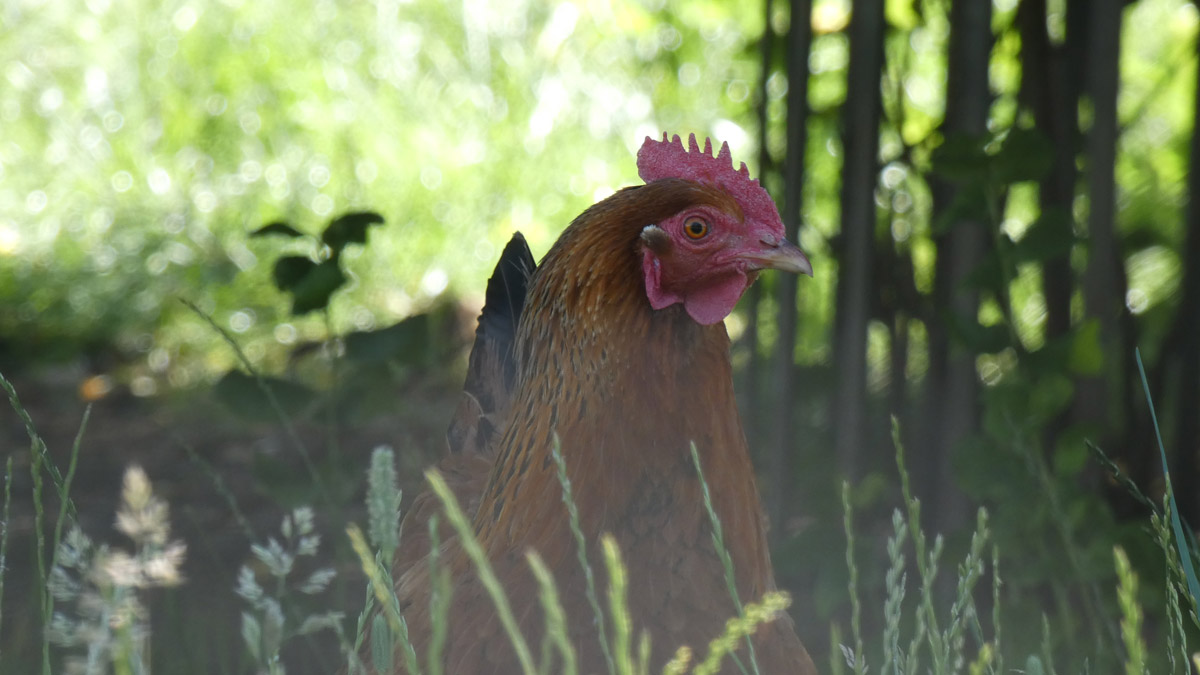 Tamworth pigs have been kept at Waltham Place for at least the last half century. Their distinctive ginger colouring singles them out from other breeds. As Britain’s oldest pure breed, it is similar in appearance to the Old English Forest Pig. Long legged and lean, this is an active pig, a vigorous digger suited to outdoor systems and woodland settings where they can exercise their love of rooting for food. Here at Waltham, a visit to the pigs is often one of the highlights for school groups. From Spring until the onset of Winter the pigs roam free outdoors in moveable paddocks created with electric fencing. Their rooting behaviours are excellent for clearing ground prior to vegetable production, breaking up compacted earth and removing the deep-rooted cooch grass that has taken hold in certain areas. Fertilising as they go, the pigs leave the land ready for planting the following year. In Wintertime, the pigs come indoors to rest the land, taking up quarters in open fronted sheds with the cattle. The two species co-exist well, though the pigs are in charge. Living alongside these large ruminants prevents the pigs from becoming bored and they are entertained by snuffling through the deep straw bedding. Throughout the year the pigs are fed not only on what they can forage in their paddocks, but on the bounty of the estate: waste fruit and vegetables, excess grains and wild forage such as acorns. We currently buy in a small percentage of hard feed for them, but this will eventually cease as our ancient grains project reaches fruition. We currently have two pedigree breeding sows and a boar, and are raising the young stock for meat. As a slow growing breed, they take time to rear but pay dividends in taste and quality.

The estate runs a small flock of free-range chickens and guinea fowl. Over the years many traditional breeds of chicken have lived here: Derbyshire Redcap, Buff Orpington, Araucana, Light Sussex, Maran and Poland to name but a few. Also, a number of hybrid chickens rescued from battery farms at the end of their working lives, who once rested and rehabilitated have gone on to have many more active years here at Waltham. Each year we allow our broody hens to sit, resulting in an eclectic mix of colouration within the chicks born to the flock, as their heritage shines through.  From time to time the flock is restocked, usually after a fox attack. Despite fencing and electric wire, this is an inevitable hazard of living alongside our neighbouring wild foxes. The chickens have the run of the Chicken Orchard, creating dust baths under the old fruit trees and foraging for seeds and insects. Their eggs are in high demand and feature in the salads and baked goods in the tearoom. The guinea fowl roam as a wild flock but can often be found in the chicken run as breakfast is served. Throughout the day they venture out, visiting the farmyard and fields as the mood takes them. At night they roost in the oak trees. A noisy bird, travelling as a pack, the guinea fowl are a favourite with visitors.

Produce from the farm is used by the main house and The Barn and is also available to staff. The public can access seasonal produce through our Vegetable Box Scheme and Farm Shop.

Fresh produce from June through to December

Deliciously different, our biodynamic and organic ethos means that everything you buy will have been produced here at Waltham without the use of chemical fertilizers or pesticides.
shop now →